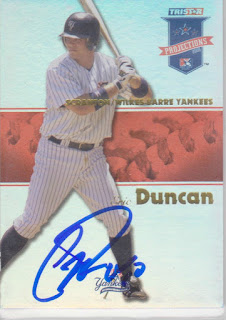 It was bound to happen. When you make a minor league set, you know going into it that not every player is going to make it to the Majors. Here is the first player from this set that I have posted that never made it.

Eric is pictured with the Scranton/Wilkes-Barre Yankees on this card and I actually got it signed at a SWB Yankees game. What are the odds of that? Well, to be exact, my buddy got it signed at the game. I was busy 'graphing the visiting Durham Bulls and he was nice enough to grab a few 'graphs for me from the Yankee side.

Eric was the Yankees first round pick in 2003. He was a top 100 prospect for a couple of seasons and got his first taste of AAA in 2006. Then he got stuck in AAA and was there through the 2009 season, which is when he signed this card. The Yankees released him after that season and he went on to play three more years of AA ball with three different organizations before calling it a career.

It is hard to tell in the scan, but this card is a reflective parallel.

The Yankees still have their AAA team in SWB, but they have ditched the Yankee name. They are now the Rail Riders.
at 8:49 AM