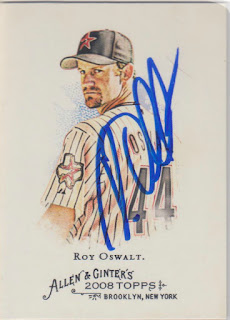 In the two years of the Kansas Stars, I made it to two games and I did really well 'graphing. With the help of my dad, I came home with over seventy cards signed. It was a mixed bag of players that signed for me. Some were guys that I had gotten during their playing days, like Brad Penny. Others were guys that I got both years AND during their playing days- I now have fifteen cards signed by Brandon Inge after my dad and I each got three signed each year, plus the three I had from his playing days. Then there is Roy Oswalt. I had never gotten him before and he was nice enough to sign multiples for us. He was on the team both years, but I only got him to sign the first year. He was a two-per signer and my dad and I both got him. I believe I got two Astros cards signed, as well as a Phillies and Rockies card. Unfortunately, I do not have a Ranger card of him in my collection.

Roy was definitely one of the better 'graphs that I got from the Stars. He is up there with Josh Beckett and Tim Hudson. While Roy never brought home any hardware or a title, he was a dominate pitcher for nearly a decade that won twenty games twice, hit double digit wins for eight straight seasons, struck out 200+ twice, and made two All Star teams. Plus, he helped guide his clubs to four postseason appearances.