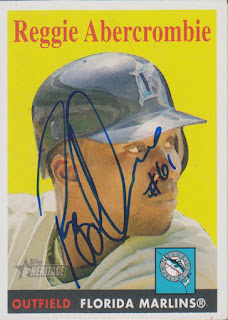 Here is another card of Reggie Abercrombie that I got signed at a Wichita Wingnuts game in 2016 while he was with the Winnipeg Goldeyes. I posted another card from that day about a week ago and it can be seen here. In that post, I talked extensively about Reggie's long career in the American Association. Unfortunately, his Major League career was not nearly as long.

In his one season in Houston, Reggie got just 55 at-bats, but he responded by hitting .309 with a pair of dingers and driving in 5. He started the month of September with a .200 average, but finished strong to raise it to its final level. That apparently was not good enough as he wound back up in AAA the following season before landing in independent ball the year after that.

This is a good looking card, but it is a little bit off for a copy of the 1957 set. The non-posed shot is just wrong. It has a classic big head, but the head is not looking at the camera. It is looking at the pitcher. I am fairly certain that there are no cards in the '57 set where that is happening.
at 7:54 AM