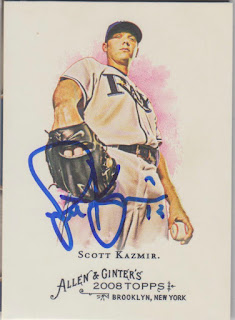 Here is a card that I got signed at a Royals game in 2009. Scott had just been traded to the Angels about a week before that and I got lucky by spotting him mulling around in the dugout while the Angels were taking batting practice. I called over to him and he came over and signed one of the three cards I had of him. I do not remember what other two cards I had at the time, but I doubt that they were better than this card.

While looking at Scott's stats, I was surprised to see that he hasn't pitched since 2016. I knew he was traded this past off-season from the Dodgers to the Braves in the great salary dump trade. I guess I just never realized that the Braves released him in Spring Training and nobody ever picked him up.

If Scott's career is indeed done, he had a nice one. Playing twelve seasons with six teams, he racked up a 108-96 record with a 4.01 ERA. The three time All Star played in three postseasons. His best year was with the Devil Rays in 2007 when he went 13-9 with a 3.48 ERA and a league leading 239 strikeouts. That was his only 200 strikeout season.

I'm pretty sure his playing career is finished. I got him at a free autograph signing at a Rays game this past season.