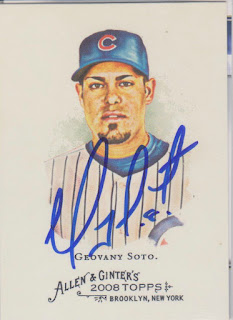 Here is a card that I got signed at a Royals game in 2012. And by I, I really mean my future wife at the time. The two of us went to a weekday game against the Rangers and Geo was the starting catcher that night. He was out in the visiting team bullpen loosening up and I talked my future wife into asking for his autograph. I like getting autographs by the bullpen, but they usually consist of coaches or back-up catchers catching a bullpen session. Geo was down there by himself and I made my future wife ask for him to sign. I figured that he wouldn't sign since he was getting ready, but, in the off chance he did, he would be more willing to sign for a cute little female than my big, bearded ass. It actually worked and he even signed all three cards for her.

Unfortunately, my wife's autographing days are behind her. Ever since we had a little one, she gets tasked with watching over him while I do my 'graphing. One of these days, though, he will be 'graphing at my side and I may once again be able to put her to work for me.

Geo is one of those guys that had a monstrous rookie season and was never able to replicate it. He went off in 2008 with a .285 average, 23 home runs, and 86 RBI en route to an All Star Game selection and winning the National League Rookie of the Year. Even though he would play in the league for nine more seasons, he would never come close to those numbers again. By the time I saw him play that day in 2012, he wasn't even a .200 hitter any more. In fact, he barely reached double digit home runs in a season that he was traded for a minor league player that would never make the Majors.

In 2009, I went to an Iowa Cubs game and was impressed enough by a catcher's chest protector that I took a picture of it. It is Geovany's from the 2007 season when he was the Pacific Coast League MVP. 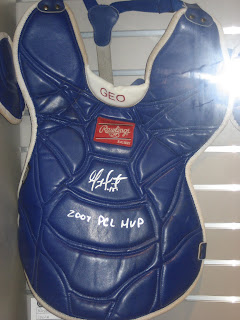