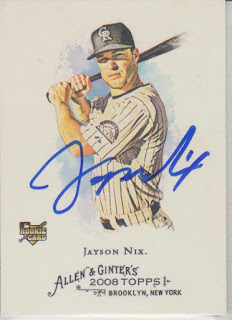 Here is a card that I got signed by Jayson Nix at the Kansas Stars game in 2016. I was pretty lucky to get Jayson to sign because I did not recognize him at all. He was sporting a large beard at the time and he had always seemed pretty clean cut while he was playing. Eventually, he got close enough to me that I could barely make out his name on his bat. He came over and signed three cards for both my dad and myself.

Jayson had a whirlwind career. In his seven year Major League career, he saw time with eight teams. He started out with the Rockies before playing with the White Sox, Indians, Blue Jays, Yankees, Phillies, Pirates, and Royals. Before this post, I had forgotten he played briefly for the Royals in 2014. I guess he didn't stand out too much when he went 0-11 in ten regular season and postseason games.

Jason finished his career a .212 hitter with 38 home runs and 130 RBI. His best season was probably during the 2010 campaign, which was split with the White Sox and Indians. He got off to a rocky start in Chicago, but ended up hitting .234 with 13 homers and 29 RBI after the Tribe claimed him on waivers in June.
at 8:42 AM