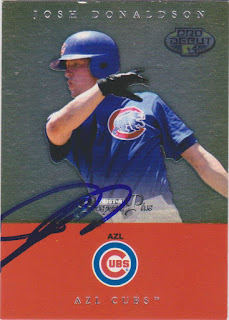 Here is one of my most recent in-person autographs. If you recall, Josh Donaldson was traded to the Indians late this past season. Even though he was pretty much injured when he got traded, he managed to make it into sixteen September games for The Tribe. When I went to a game for the final series of the season in Kansas City, the Indians were in town and, apparently, Josh is a great signer. He signed for quite a bit during batting practice and even signed all three of the cards I had of him. I was quite impressed.

Even though Josh never played a game for the Cubs, I still thought that I should take this card with me. Along with this card, I also got a Blue Jays card and an A's card signed. All three featured a rushed looking ballpark signature, but one had one more loop in it than the other two. This is not that one. In fact, it looks like Josh had a hard time staying on the card with this one.

Although Josh managed to hit .280 for Cleveland during that final month of the regular season, the trade didn't really work out for them. They were going to win the division and make the playoffs with or without Josh. They were banking on him to help them during that postseason and that just didn't happen. Josh was 1-11 in the Division Series as the Indians were swept by the Astros.

Nevertheless, Josh was able to get a quick deal done this off-season and will be joining a new organization next year. On November 26th, the Braves signed him to a one year, $23 million contract. I was surprised to see him jump on a one year deal so soon, but, after last off-season, I can't say that I blame him.
at 9:05 AM