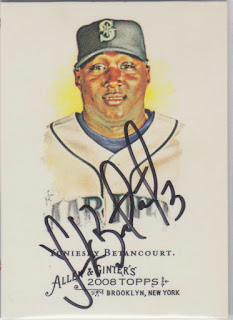 Here is a card that I got signed at Royals Fanfest in 2010. Yuni had come over from the Mariners midway through the 2009 season and by Fanfest 2011, he had been traded to the Brewers in the Zack Grienke deal. As much as I loved Lorenzo Cain, the best part of that trade was getting the Brewers to take Yuni.

To be honest, I really do not remember why I didn't care for him. Before he was dealt to Milwaukee, he had a career year in Kansas City. That season, he hit .259 and had career-highs in home runs (17) and RBI (78). Those are some decent numbers for a shortstop. Those 78 ribbies tied him for the team lead and he also hit three grand slams that year.