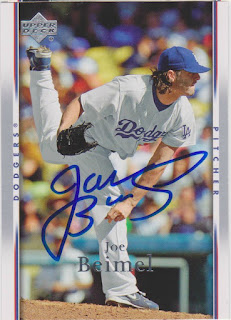 Here is the second and final card that I got signed by Joe Beimel at the Kansas Stars game last year. I posted the first card three months ago and it can be seen here.

Joe pitched for the Dodgers for three seasons and did really well. He started off as a middle reliever before transitioning to the left-handed specialist role. Over that time, he had a record of 11-4 with 3 saves and a 3.14 ERA. That was the lowest ERA he had with any single franchise.

In 2008, Joe was 5-1 with the Dodgers and posted a career-best 2.02 ERA. By that time, he was in full LOOGY mode, logging just 49 innings of work in 71 appearances. He also got his first taste of the postseason that year. He appeared in three games of the NLCS and worked a scoreless two-thirds of an inning while walking two batters.

Joe has an interesting signature where the first letters of each name are made with the same stroke. You really can't make out much more after that, though, and it looks like his name ends with a capital "S".
at 6:06 PM