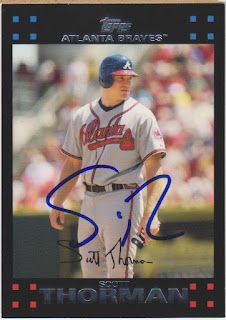 Here is the second card that I got signed by Scott Thorman at Spring Training in 2017. Scott is the manager of the Royals South Atlantic League team and he was nice enough to stop and sign after a morning minor league workout. I posted the first card of Scott during the summer and it can be seen here.

Scott played in the affiliated minors through the 2012 season, but never got another shot at the big leagues.

When I posted that last card of Scott, his Lexington Legends had just started the second half of their season and were off to a slow start. But, Scott was able to right the ship and get them going and they ended up winning the division in the second half en route to a league championship.
at 12:00 PM