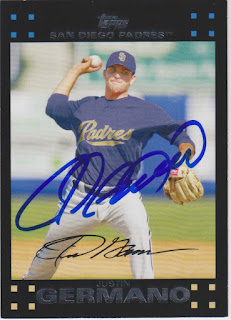 Here is the second card that Justin Germano signed for me at the Kansas Stars game I attended in 2016. I posted the first card in September and that one can be seen here.

Justin spent parts of nine seasons in the Majors with seven different teams- the Padres, Reds, Indians, Red Sox, Cubs, Blue Jays, and Rangers. And, when I say parts of seasons, I really mean parts. There were three seasons where he only appeared in one or two games. Nonetheless, he still pitched in 96 Major League games with exactly half of those being starts. In those games, he posted a 10-30 record with a 5.40 ERA while striking out 209 in 330 innings of work.

For those of you keeping score at home, this card is a red back variation. I never understood the red backs in this set. But, they appear to be a hobby only parallel.
at 10:14 AM