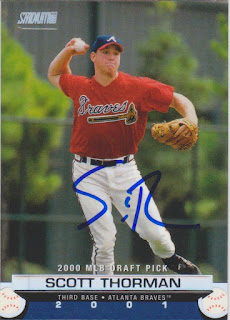 Here is a card that I got signed at Spring Training last year. Scott is the manager of the Royals South Atlantic League affiliate, Lexington, and I was able to get him to sign two cards for me after the Royals minor leaguers worked out.

Out of all the Arizona League home's that I have been to, the Royals side of Surprise Stadium is one of my favorites. While you are not going to get any 'graphs from the big leaguers, it is a great spot to hit up the guys in the minors. The main reason for that is that the Royals put names on the back of the jerseys. Most of the teams do not do that and it is a pain trying to identify the lesser known guys. Also a plus is that the players have to walk quite a ways to get back to the clubhouse. There is no easy exit for them and you can get guys that you missed just by catching up to them.

The Lexington Legends finished up the first half of their season 2.5 games out of first place. It is still early into the second half, but they are off to a sluggish start. Through eight games, they are 2-6 and bringing up the rear of the South Atlantic League Southern Division.

I bought this card online as I wasn't really collecting cards in 2001. It just seems odd to me that Stadium Club would have draft pick cards. I know they did some draft pick sets early on in the brand, but this card feels out of place to me. This seems like something that should have been in Bowman.