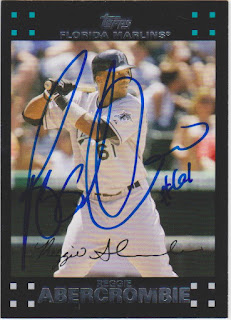 I really thought that this was going to be my fifth post of a card from Reggie Abercrombie. It turns out it is just my third. The ones that I thought I had already posted are newer cards from 2008 and 2009.

Reggie has been a regular in the American Association since 2010. I ran across him twice that year and posted a card from each run-in. The first one was at a Wingnuts game when he was with the Sioux Falls Pheasants. The second one was at the All Star game that was hosted in Wichita. This one was signed at a 'Nuts game in 2016 while Reggie was with the Winnipeg Goldeyes.

Reggie was still active in the league this past season and did really well at the age of 37. He finished the season with a .316 average, 15 home runs, and 62 RBI. He was even able to nab 12 bases. Since he has played in the league for nine straight seasons, he holds numerous league records. He is their all-time leader in hits (839), home runs (130), and RBI (536). He is second in runs scored and fourth in stolen bases.

When I got this card signed, Reggie was coming off the field after warming up. I didn't think that I was going to be able to get his attention because he had headphones in. But, I obviously did, and I got a good looking signature from him. I thought it was neat that he added his number to this card because he did not do that to the Marlins card I posted six years ago.