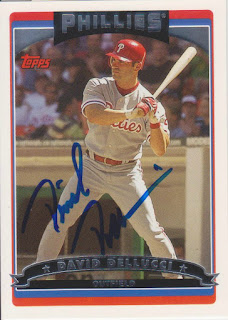 Here is the second card that David Dellucci signed for me at the Kansas Stars game last year. I posted the first card in June and that one can be seen here.

That first card showed David with is second team, and the one that he stayed with the longest, the Diamondbacks. After the D-Backs, David played for the Yankees and Rangers before landing in Philadelphia for the 2006 season. He did well for the Phillies that year, hitting .292 with 13 home runs and 39 RBI. He was used more as a pinch hitter that season than a starter, but he still did well enough to get a three-year deal from the Indians for about 3.75 million dollars a year.

The Indians would end up releasing David during the final season of that deal and he would finish the year with the Blue Jays. He called it a career after that, finishing with a .256 average, 101 homers, and 398 RBI for his career.