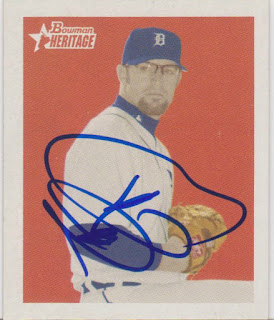 Here is the second card of Nate Robertson that I have posted on here. I posted the first one three years ago after I got it signed at a free card show in Wichita. This one, on the other hand, was signed at a Kansas Stars game in 2016.

Nate and Adam LaRoche were the masterminds of the Kansas Stars. Nate had a venue and tournament, thanks to his Wichita Wingnuts hosting the NBC World Series at Lawrence Dumont Stadium, and Adam was freshly retired. The native Kansans got some friends together and the Kansas Stars were born. They debuted at the 2016 NBC World Series and took second place. They came back in 2017 and won it all. Then, in 2018, they were no more. Supposedly, the casino they stayed at, the Kansas Star, was booked up for the week of the tournament and they had no place to stay. But, I think that the powers that be just did not want a team of former pros, which included All Stars and Hall of Famers, whooping up on college kids. That is just my opinion, though.