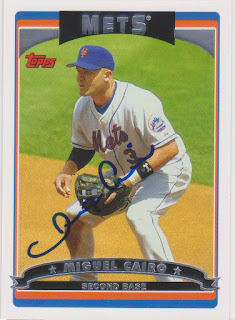 Here is the second card that I got signed by Miguel Cairo at Spring Training in 2017. Miguel was helping out the Reds at the time and I got him to sign three cards for me after the team's minor league workout. I posted the first one back in May and it can be seen here.

The first card I posted showed Miguel with the third team he played for, the Devil Rays. After three seasons with the Rays, he spent half a year with the Cubs, two and a half with the Cardinals, and one year with the Yankees before joining the Mets on the other side of town. His tenure in Queens lasted just one season before shifting back over to the Bronx for another year and half. But, while with the Mets, Miguel managed a .251 average with 2 home runs and 19 RBI in 100 games.

I was shocked to see that Miguel played parts of seventeen seasons in the Major Leagues. But, he was around for a while and I got to see him play eleven times between 2000-2008. I saw him in uniform with the Devil Rays, Cubs, Cardinals, Yankees, and Mariners. Over those eleven games, he hit just .143 with a home run and four RBI. I also saw him man five different positions as well as DH and pinch hit in those contests.

After his second stint with the Yankees, he would also go on to play with the Cardinals (again), Mariners, Phillies, and Reds.