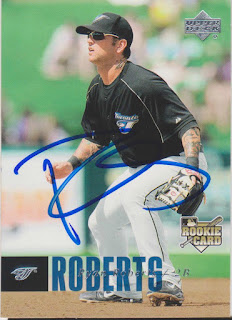 Card number 1209? How many cards are in this set? Good luck to anyone trying to get this set signed.

Anyways, here is a card of Ryan Roberts that I got signed at an Omaha Storm Chasers game in 2015. Ryan was playing his final season of baseball and spending the entire year with the Nashville Sounds. He stopped on his way out to the field and signed three cards for me.

Two of the three cards pictured him with the Diamondbacks. This was the only card I had of him with another team, so I had to get it signed. He has two cards with the Rays, but I apparently have neither of those cards.

Ryan's time in Toronto spanned all of 17 games over two seasons. In each of those seasons, he got a hit in 13 at-bats. That one hit he had in his first season, though, was a home run. So, he is in a special group of people that had a homer for their first Major League hit.

Ryan spent parts of nine seasons in the Majors. Over that time, he was a .243 hitter with 46 home runs and 169 RBI. He played in one playoff series, in 2011 with the D-Backs, and he did amazing. Against the Brewers, he was 7-20 in the five game series. He had a double, two homers, and drove in six.