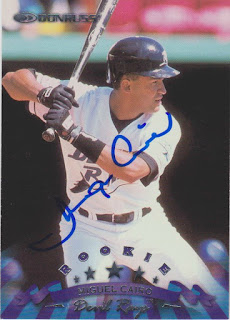 This is the first Devil Rays card I have posted on here in over two years and is only the third Devil Ray on here to feature the team's inaugural uniforms. Needless to say, but I bet there are not too many Rays fans that check out this blog.

I got this card, and two others, signed by Miguel last year at Spring Training. At the time, he held a front office title and I was able to find him in the back fields helping out the minor league players.

Miguel was an original D-Ray and he spent three years with the club after being taken from the Cubs in the expansion draft. Despite being a utility player for most of his career, he was the Rays everyday second baseman while he was there and he never played any other defensive position. Over those three years, Miguel would hit .275 with 9 home runs, 116 RBI, and 69 stolen bases. His 48 RBI for the inaugural Rays were a single season high for him.