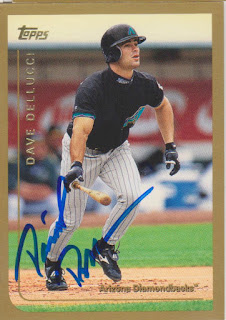 Here is the first of three cards that David Dellucci signed for me when he played of the Kansas Stars last summer. The Stars were a group of former pro players that competed in the NBC World Series against predominantly college athletes.

David played in the Majors for thirteen seasons with the Orioles, Diamondbacks, Yankees, Rangers, Phillies, Indians, and Blue Jays. Out of all those teams, he spent the most time with the D-Backs, playing with them for parts of five and a half seasons. Over that time, he got into 503 games and he hit .272 with 25 home runs and 156 RBI. He was with the club when they won the World Series in 2001 and was mainly used as a defensive replacement during the playoffs. He got into six games and was 2-4 at the dish. Just prior to the 2003 trade deadline, David was traded to the Yankees. He would make his second and final World Series appearance with them and go 0-2 in four games.

The Kansas Stars are no more this year, which is pretty disappointing for me. I had quite a time 'graphing them the last two years. But, the team is still going to be playing together this summer at the Bluegrass World Series in Louisville as the Louisville Stars. I have no idea who they will be competing against, but it is sure to be a good time. So, if you are going to be in the Louisville area between July 30th and August 4th, it may be worth checking out.
at 5:43 PM