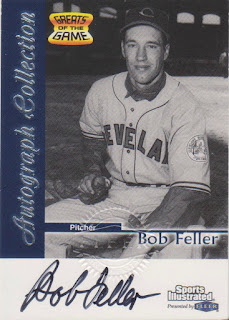 Here is a card of Bob Feller that I won in a contest three years ago. Brian, from Play at the Plate, picked up some cards and happened to get a couple of autographed cards from Hall of Famers. All you had to do to win one of them was guess who he got. I threw Bob Feller out there and came home a winner.

I have actually posted an autograph from Bob Feller on here before. In 2009, I stopped at Van Meter, Iowa to visit the Bob Feller Museum. Back then, I had a lot more time on my hands and I actually did a write-up on the visit and my trip to the Metrodome. You can read about it and see the signed card of Bob that I bought there here.

I thought I had heard rumblings about the museum closing after Bob passed away in 2010. But, it looks like it is still up and running.