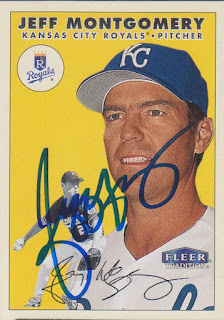 I cannot believe that it has been nearly four years since I have posted a card of Jeff Montgomery. When I posted that last card, the ninth signed card from Jeff, I complained that I had too many signed cards from him. While I don't mind a lot of different signed cards of the same person, it gets really hard to posts those cards with meaningful commentary on here after the third post. Luckily, I haven't had to worry about that the last four years.

I got this card signed at the last Royals Caravan that the team held in 2015. The team was fresh off their American League pennant run and they threw a less than spectacular Caravan together. The leg that came through Kansas consisted of Monty, Lane Adams, and Brandon Finnegan. It wasn't completely awful since I did not have an autograph from Adams or Finnegan. But, I had to find a card of Finnegan quick since he was drafted in 2014 and didn't have any mainstream cards yet. I ended up with a Panini Draft card and all was well.

The Royals went on to win it all in 2015 and they did a rather unusual Caravan in 2016. Rather than take players around, they took their World Series trophy. Knowing that the trophy was going to be displayed for eternity at Kauffman Stadium, I did not bother with that. In 2017 and 2018, the Royals did nothing and, as of right now, the Royals Caravan appears to be dead in the water. But, with how awful the team is right now, it might not be a bad idea to get something restarted next year. We will have to wait to see what happens.

It kinda sucks how winning often means teams stop caring about various fan-friendly activities they used to do.