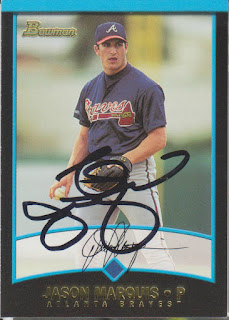 Here is a card of Jason Marquis that was given to me by Rod, from Padrographs, when we met up at a Hillsboro Hops game in 2015. Jason pitched for the Padres for two seasons, so I am assuming Rod picked up this card with a signed Padres card to add to his collection.

Jason pitched in the Majors for parts of fifteen seasons with nine clubs- the Braves, Cardinals, Cubs, Rockies, Nationals, Diamondbacks, Twins, Padres, and Reds. Over that time, he amassed a 124-118 record with one save and a 4.61 ERA. He pitched in five postseasons and won a Silver Slugger Award.

Jason pitched for Atlanta for four seasons, going 14-15 with a 4.45 ERA. He also picked up his lone save as a Brave. After the 2003 season, he and Adam Wainwright were dealt to St. Louis for JD Drew and Eli Marrero. The Cardinals went on to play in two World Series over the next three years, so I would say that they fared better from that trade. Interestingly, when the won the Series in 2006, Jason did not appear in a single postseason game.
at 1:00 PM