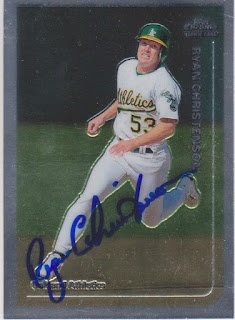 Here is a card that I got signed by Ryan Christenson at a Spring Training game earlier this year. Ryan is the bench coach for the A's and he was nice enough to sign my one card for me prior to the start of the game.

Ryan's playing career overlapped the time when I was in college and not actively collecting cards. Still, I somehow ended up with a decent amount of Topps product from 1999 and was lucky enough to have this lone card of him to get signed. Ryan has a long last name and I am amazed whenever I see a plaery sign every single letter like he does. That is a rarity in this day and age.