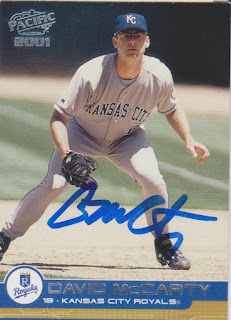 Here is a card that I got signed by David McCarty earlier this year. For a bit, I was sending out cards TTM to former Royals that I did not have signed cards from. That was how I got this one. I sent it to David in February and I got it back about five weeks later.

David played for the Royals for about two and a half seasons. His first season in Kansas City was his best season as a Major League player. That year was the only season that he played in over 100 games and he responded with a .278 average with 12 home runs and 53 RBI, all career bests for him. That was in 2000 on a very talented offensive squad.

I got to see David play two dozen times as a Royal and he always seemed to do well when I was there. He hit .295 with 10 RBI and 3 dingers in those games.

In 2003, with the Red Sox, David had the opportunity to pitch. He actually got three chances that season and he did well, posting a 2.45 ERA with 4 strikeouts in 3.2 innings of work.

Pretty sure I got a chance to watch McCarty play at Stanford back in the day. Was really pulling for the guy in the early 90's... hoping he'd make it big in the MLB.

While he never made it big, he did stick around for eleven seasons and counts for something.