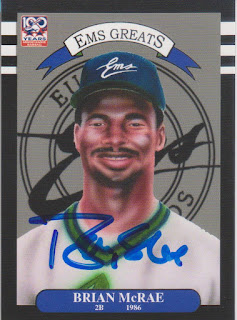 Here is a unique card that was given to me unsigned by Rod, from Padrographs. He picked up this Emeralds All-Time Greats team set at an Ems clearance sale and was nice enough to give me some of the cards that featured Royals.

I got the card signed at a Royals game last summer at the alumni signing the Royals host on Sundays. To my amazement, Brian has never seen this card before and was wondering if I could get him one. He apparently has a nice collection of his cards and was wanting to add this one to it. I wish he would have told me that before he had signed it and I just would have gave him this one.

When I got home, I looked online for this card and even contacted Rod to see if he had an extra. I came up empty handed with both of those endeavors. I saw Brian earlier this year at a Royals game and told him I couldn't find another one and he had the same experience with his own search. I again offered this one up to him, but he told me not to worry about it. So, if anyone has this card in their collection, I know a fellow collector that needs it.

The neat thing about this set is that the images appear to be airbrushed. It is hard to tell with the signature on this card, but all the lines on the jersey have over-spray around them.
at 10:06 AM

I like the look of this card. Gives off the whole Diamond King vibe. Hope you're able to track down a copy for Mr. McRae eventually. I'd create a search on eBay for this card as well as the set and cross my fingers. I'm sure one will pop up eventually.