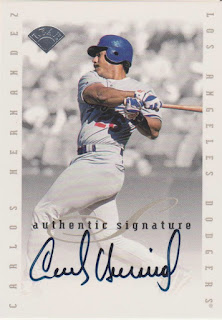 Here is another card I got from Night Owl a while back in exchange for a Jackie Robinson manu-bat knob. Other autos he gave me were of Rick Dempsey, Billy Ashley, and Todd Hollandsworth. The other three cards were all base cards that had been signed at some point. This, an autographed insert, is more of what I expected to get in the trade since Greg isn't an autograph collector.

Carlos played in the Majors for parts of ten seasons with the Dodgers, Padres, and Cardinals. He spent the better part of his career in Los Angeles in the back-up catcher role. But, in 1998 with Padres, he was the team's primary catcher and he had a good season. He ended up playing in 129 games while starting 102 of those. For the year, he hit .262 with 15 doubles, 9 home runs, and 52 runs driven in.