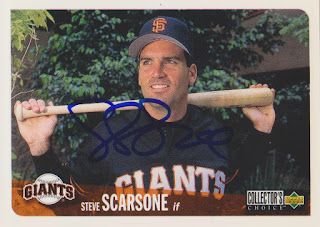 Here is the second of two cards that I got signed by Steve Scarsone in 2015. Steve was the skipper of the Nashville Sounds at the time and he signed for me at an Omaha Storm Chasers game. I posted the first card last month and it can be seen here.

Steve played in the Majors for parts of seven seasons with five different clubs- the Orioles, Phillies, Giants, Cardinals, and Royals. Over that time, he was a .239 hitter with 20 home runs and 86 RBI.

The Giants were the only team that Steve saw any significant time with. He played with them for four seasons. He never played in more than fifty games with any other club and played in less than a dozen games with three clubs. With San Francisco, Steve played in 281 games and hit .247 with all 20 of his home runs and 80 of his RBI. Even though he got into 103 games with the 1996 squad, 1995 was his best season. That year, he hit .266 with 11 home runs and 29 RBI.

From what I can tell, all of Steve's Major League cards are of him as a Giant, except for two. There is one of him as a Phillie and one as an Oriole.

The signature on this card came out looking much better than I ever would have expected. The black warm-up jersey and shadowy backdrop are usually not a good combo, but I guess I got lucky on this one.
at 10:19 PM