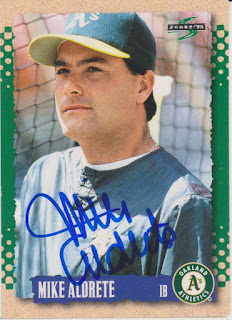 Here is the second card that Mike Aldrete signed for me at Spring Training last year. I posted the first back in July and that one can be seen here. It is pretty sad that I have only made it to my 1995 cards since July. I need to find time to post more.

When I got this card signed, Mike was the A's hitting coach. He has since been demoted to the team's assistant hitting coach. I saw him again this spring and he signed three more cards for me. One of those will be showing up here in the coming months. The other two are older, so it will be years before they make an appearance on here.

This is the only card from this set that I have signed and it seems perfect that it is of an Athletic. This set seems like it was meant for that club.
at 5:55 PM