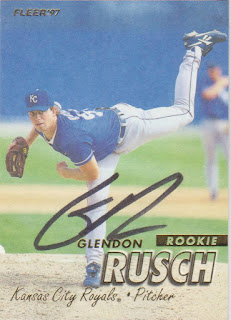 Here is another new addition to the collection. This signature was obtained through the mail two months ago. It took exactly one month to make it back home.

Glendon pitched in the Majors for twelve seasons with the Royals, Mets, Brewers, Cubs, Padres, and Rockies. Over that time, he amassed a 67-99 record with 4 saves and a 5.04 ERA. His best season was with the Mets in 2000. That year, he was 11-11 and those 11 wins were a career high. He also had career bests in strikeouts (157) and ERA (4.01). He even got to pitch in three games of the World Series that season and he allowed one run in four innings of work.

But, the only reason that I wrote to Glendon was because he was once a Royal. That only lasted for about two and a half seasons. In that time, he was 12-25 with a save and 5.80 ERA.

Even though Glendon was only a .151 hitter for his career, he did manage to smack three home runs. Two of those came in the same season while with the Cubs in 2004.

While I am not one to complain about a free autograph, especially when someone takes the time to respond to my request from the comfort of their own home, I must say that Glendon's signature is really lacking. I am not sure if this is typical of him, but clearly all I got from him were his initials.