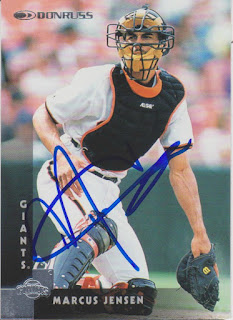 Here is one of my most recent autographs. Marcus is the bullpen coach for the A's and I was able to get him to sign at Spring Training this year. I had planned on 'graphing the Angels that day at their home spring ballpark. But, by the time we got into the park, the Angels side was completely full. I looked over at the visiting A's side and there was not a soul to be seen. So, I went with the A's instead and it was a wise choice. I got about twenty cards signed over there and even came home with a Marcus Semien signed batting glove.

Marcus played in the Majors for parts of seven seasons. Over that time, he played in 145 games with the Giants, Tigers, Brewers, Cardinals, Twins, Red Sox, and Rangers. The most games he ever played in a single season was 52 with the Twins in 2000. That year, he hit .209 with 3 home runs and 14 RBI.

In 2000, Marcus had the pleasure to represent the USA at the Olympics in Australia. He came home with the gold.