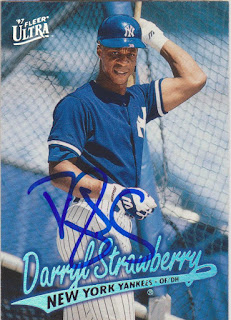 Here is the Yankees card that I picked out to get signed by Darryl two years ago when he came to Wichita to preach at a local church. I already posted a card of him with the Mets and Dodgers and I did not have a Giants card of him to get signed.

Darryl spent his last five seasons wearing Yankee pinstripes. Those five years were riddled with injuries and his treatment for colon cancer, but the Yankees kept bringing him back every year. The reason for that was because, unlike his Dodger days, he did real well.

Darryl played in 231 regular season games with the Yankees and he hit .255 with 41 home runs and 114 RBI. That is a 162 game average of 29 homers and 80 RBI. Who wouldn't want that in their lineup? That is even more impressive considering that Darryl played for the Yanks in his age 33-37 seasons.

Though past his prime during his second go-around in New York, Darryl still accomplished some feats. He had a three home run game in 1996, which was only the second of his career. He hit 24 homers in '98, he next to last season. He got to play in the postseason three more times and came home with a ring each time. Though his postseason numbers with the Yankees were not that great, he was red hot during the 1996 ALCS. In the four games he played against the Orioles, Darryl was 5-12 with 3 home runs and 5 RBI.
at 4:05 PM