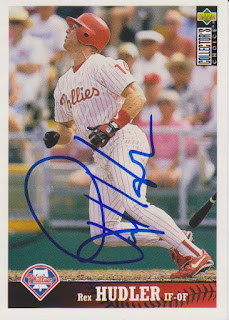 Here is one of my newest Rex Hudler autographs. My older son got this card signed for me at Spring Training this year. The two of us had the same arrangement as last year where I would give him a dollar for every card that he got signed. Unfortunately, he had a rough time this year and only netted five bucks. Three dollars of it was courtesy of Rex.

A couple of years ago, I found out that a work colleague of mine used to collect cards. We had worked side-by-side daily for a year before she transferred to another store. Somehow, during that whole year, I had no clue that she had ever collected cards. I didn't even realize she knew anything about baseball. The only reason I found out about it was that she gave a few cards for Christmas one year. When she told me that they came from her collection, my mind was blown.

Last year, she dropped off a container of cards that were from 1995-1998 and she told me to take anything I wanted. There were a lot of star cards from the day in the box, but those weren't the ones I was looking for. I was looking for cards that I could get signed. That is where this card came from.

I like the vague position listed on this card- IF/OF. In case you were wondering, The Hud played mostly second base in 1996 and he appeared at that position 53 times. He also played first 7 times, center field 15 times, and left field 8 times. I think that they probably could have just listed him as a second baseman.
at 12:30 PM