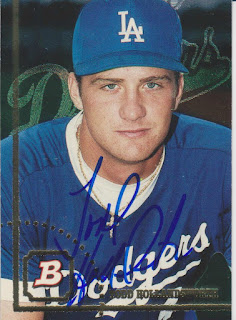 This is the second time that I posted a card of Todd Hollandsworth on here. I picked up a signed Signature Rookies card of him for sixty cents once and I posted that card almost four years ago. This one, on the other hand, was picked up in a trade with Night Owl a couple years back. I pulled a Jackie Robinson manu-bat knob out of a pack of Topps and I offered it up to him. In return, he sent me a small handful of signed Dodger cards. It was win-win for everybody.

If you compare this card to the Rick Forney card I posted yesterday, you will notice that this card is a bit different than Forney's '94 Bowman. This one is almost metallic with the Dodger logo etched into the backdrop. I looked up to see that this parallel was called and it turns out that it is not a parallel. It is just a cool looking base card.

Todd actually had two base cards in this set. The other one was just a normal card, though. It looks like both cards used the same photo, but this one is cropped a little tighter.
at 9:19 AM