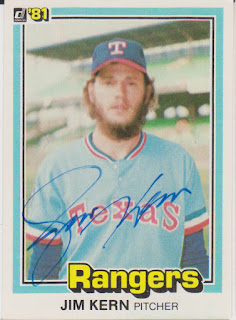 Here is the second card of Jim Kern that I got signed through the mail last spring. The first one was his '77 Topps that I posted last month. But we all know that the '81D was the real reason I wrote to Jim and I must say that this card came out looking much better than the '77. Nothing against Topps, but that dark jacket Jim was wearing in the photo was what did that one in. The blue Sharpie stands out much better over the baby blue road jersey on this card. Let's just face the facts- you cannot beat a signed '81 Donruss.

Jim pitched with the Rangers for just three seasons. He made the All Star team his first year there to cap off three straight appearances. That season, he was lights out. He finished the season 13-5 with 29 saves, a 1.57 ERA, and 136 strikeouts. His relief efforts won him tops honors for American League relievers that season.

Unfortunately, he would only pitch about half as many innings the next season and he would never go on to record double-digit saves in a season ever again. He did, however, pitch for nine more seasons, but was never able to recreate the success he had with the Rangers in 1979.