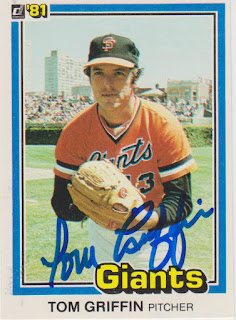 This is the card from Tom Griffin that I got signed through the mail about a year ago. I sent this card to Tom last January and I got it back nine days later.

Tom pitched in the Major Leagues for fourteen seasons with the Astros, Padres, Angels, Giants, and Pirates. He spent his first seven and a half years in Houston before starting to jump around a bit in the second half of his career. He both started and relieved throughout his career and amassed a 77-94 record with 5 saves and a 4.07 ERA.

Tom's best season was his rookie campaign when he went 11-10 with a 3.54 ERA and 200 strikeouts. Those 200 Ks were ninety more than he would ever get in any other single season.

Tom also had a little pop in his bat. Though he was just a .163 hitter, he did smack 10 home runs during his career. Two of those came off of Hall of Fame pitchers Fergie Jenkins and Steve Carlton.