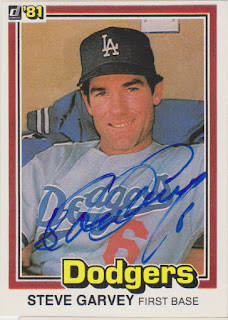 Next up is this Steve Garvey card that I got signed through the mail in 2013. I did not have this card of Steve, so I picked up up from Sportlots for $.18. Steve charges for his signature, but I had no problem paying the small fee to get this card signed. Steve has one more card in the set that I also need to get signed now. It took Steve just two weeks to get this card back to me.

Steve was winding down his career when I first heard of him. In fact, when I think of Steve Garvey, I think of his '85 Topps record breaker card from his days with the Padres. But, of course, he spent the better portion of his career with the Dodgers. And he had some monstrous seasons with them.

With Los Angeles, Steve had five seasons with 20+ home runs AND 100+ RBI. Plus, he hit over .300 in all of those seasons except for one in which he hit a meager .297. That happened to be the '77 season when he had career highs in both homers (33) and RBI (115). During his time with the Dodgers, he made eight straight All Star teams and he went to four World Series. Then, with San Diego, he made two more All Star teams and appeared in one more World Series.

Garvey was so clutch in the postseason. I remember it well.