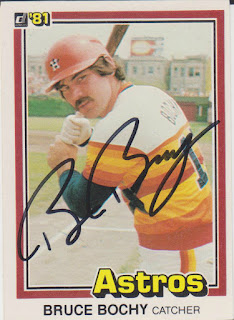 I finally got my scanner up and running last night, so I am back at it. Here is a card of Bruce Bochy that I got signed through the mail in 2015. Like the previous card of Grant Jackson that I posted, this one also took me two attempts to get signed. I originally wrote to Bruce during Spring Training in either 2013 or 2014 without ever getting the card back. Then, in 2015, I saw people getting him during the middle of the season, so I wrote him again. I got this one back after a month wait.

Bruce was a backup catcher in the Majors for nine seasons with the Astros, Mets, and Padres. Most of that time was spent in San Diego and he accumulated a lifetime batting average of .239 with 26 home runs and 93 RBI. His best season came with the Friars in 1986 when he hit .252 and had career highs with 8 homers and 22 RBI.

Since retiring, Bruce has been a huge presence in the National League West. He managed the Padres from 1995-2006 before heading north to San Francisco for the last ten seasons. I can't believe that he has managed twenty-two consecutive seasons, but he has. Over that time, he won one National League pennant for the Padres and three World Series with the Giants. Despite his success this decade, he has only won Manager of the Year once and that came with the Padres in 1996.