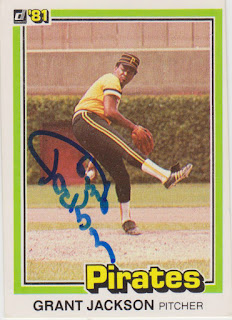 It has been about three weeks since I last posted a card thanks to my computer's power supply taking a dump. Luckily I was able to gt it fixed without encountering any damage. It just took a little longer than I had hoped. But, all is well now.

Here is the second card of Grant Jackson that I have posted on here. I posted the first one, his '71 Topps, two months ago and it can be seen here. The two cards were both signed through the mail in 2015. Obviously, this card was the main reason for writing to Grant.

Grant pitched in the Major Leagues for eighteen seasons with the Phillies, Orioles, Yankees, Pirates, Expos, and Royals. The lefty spent most of his career pitching out of the bullpen and he racked up a 86-75 record with 79 saves and 889 strikeouts. His winning record is surprising considering he was 23-43 through his first six seasons.

Grant had the privilege of pitching in three World Series during the '70s. He was with the Orioles in '71, the Yankees in '76, and the Pirates in '79. He came out of those Series with one ring and a 2.00 ERA over nine innings pitched.

Glad to see you posting again. I was wondering why you had stopped for so long. I'm hoping to get Grant's autograph later this month at the Pirates fantasy camp.

Now, if I could just figure out how to scan a card on this reconfigured computer, I could post another card.