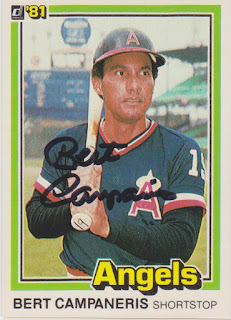 I had met Bert twice in person at events held by the Kansas City T-Bones. Those events were about eight years ago and, while I got cards signed by Bert, I did not get his '81 Donruss signed. Most of my '81 D were bought in an unopened box back in 2008. Since the cards were twenty-seven years old, and Donruss put gum in their inaugural packs, each pack had one card with a peice of gum glued to the front of it. Of course, the only card of Bert in that box had gum on it. So, I had to buy this card and get it signed through the mail. I did that in 2014 and got the card back two months later.

Yesterday, I went to Royals Fanfest. While I was able to get in some autograph lines, unlike last year, I still did not do very well. I came home with just eleven cards signed by five guys. That hardly justifies the $45 it costs to get the family in the doors. If I would have got Salvador Perez, it would have been a good day. Instead I got Ned Yost, Scott Alexander, Chris Young, Rex Hudler, and Hunter Dozier. Out of those, Hunter was the only one that I did not have anything signed by. We missed out on all the big name players and did not even see any Royals alumni signing.

While I have always criticized the Royals for how they run their autograph lines at Fanfest, they seem to get worse and worse every year. For starters, you have to get in one of five lines and hope for the best. They do not tell you who is signing where or when. It's a crapshoot. Then, they only allow 150 people in that line. We got to Fanfest as it opened and headed for the furthest line from the door. When we got there, the 2:30 line was full already. So, we got in the 3:30 line. Perez signed for the 2:30 crowd and we got Dozier at 3:30.

After we got Dozier, we got back in line. Of course, the 4:30 was full already, so we got in the 5:30. Scott Alexander signed at 4:30 and a third of the people in line jumped out to hope for a better person in whatever line they could get in. Did they let more people in line to make up for the mass exodus? Of course not. That would have made too much sense. So, Scott signed for everybody in his line in a mere twenty minutes compared to the fifty-five minutes it took for Sal to sign for his line.

Since I have cards signed by all the big name Royals except for Perez, I would have been more than happy picking off some of the younger or newer guys that aren't as popular. But, since they only sign for the people that made it into the line before it got closed off, whether those people stay in that line or not, that is impossible to do. The lesser known guys sign for the people in less than twenty minutes and then pop smoke and vanishes.

Less than five years ago, we used to be able to hit up more than one line per session. Yesterday, we were doing good just to get in a line for every other session.