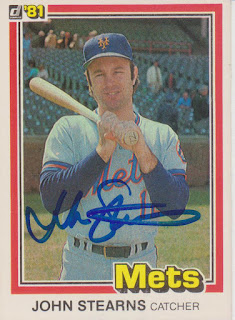 Here is another through the mail request that I sent out in 2014. If I remember correctly, John was working with the Tacoma Rainiers at the time. I sent this card to him at the tail end of the season and I got it back a week later.

John played in the Major Leagues for eleven seasons. After being the number two pick in the 1973 draft, John made his Major League debut with the Phillies the following year. He got into just one game for them and went 1-2. The Phils traded him to the Mets after that season and John would go on to spend the rest of his career with them. During that time, he was the team's primary catcher from 1977-1982 and he had a .259 average with 46 home runs and 312 RBI as a Met.