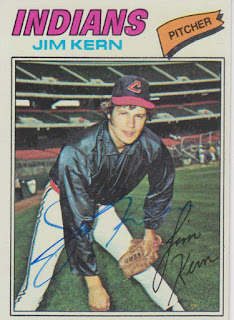 About seven years ago, I started buying packs of cards on ebay. That was how I got addicted to '81 Donruss. I bought a box of it for about $35. I would only buy packs that were from 1986 or older and I was really looking for good deals on packs from before I started collecting. During the two months I was buying those packs, I came across a pack of 1977 Topps. I had never bought or opened a pack from the seventies, so it was a fun purchase. I have no clue how much I paid for it, but the best card out of the pack was Goose Gossage. That pack also contained this card and I felt obligated to send it to Jim when I sent him his '81 Donruss card to get signed. I mailed those two cards out to him in this past February and I had them both back three weeks later.

Jim pitched in the Major Leagues for parts of thirteen seasons with the Indians, Rangers, Reds, White Sox, Phillies, and Brewers. He broke into the big leagues with the Tribe in 1974 and pitched for them for four solid seasons. During that time, he went 29-30 with 46 saves and 363 strikeouts. His performance was good enough to get him on two All Star teams as an Indian and he pitched 1.2 perfect innings over those two Mid-Summer Classics while striking out three.

After the 1978 season, the Indians traded Jim to the Rangers for Bobby Bonds and Len Barker.

Jim signed this card with a marker of some sort that had seen better days. Add that to the dark warm-up jacket that he is wearing in the photo and you have got a bad combo. But,I got a card that I got out of a pack of '77 Topps signed and I could not be happier.
at 7:20 PM