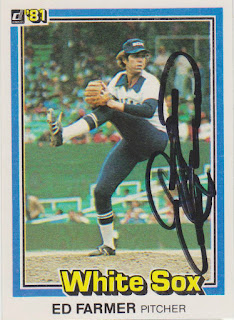 If you haven't figured it out yet, nearly all of these '81 Donruss I am going to be posting for the next couple of months were signed through the mail. It has been a few years since I got one of these bad boys signed at a game. I have two to post that I got signed at the College World Series and four that my wife bought me. The rest were all signed TTM, just like this one was. I sent this card to Ed in 2013 and I had it back two and a half weeks later.

Ed had a long professional career. He started playing in 1967 and his last season was 1986. During his two decades of pro ball, he pitched in the Majors for parts of eleven seasons with eight different teams- the Indians, Tigers, Phillies, Orioles, Brewers, Rangers, White Sox, and A's. Some of his stints were so short with a few of those teams that he doesn't even have a major card for half of them.

Ed pitched almost exclusively out of the bullpen throughout his big league career. During that time, he racked up a 30-43 record with 75 saves and a 4.30 ERA. He never really had a defined role with a club until he was traded to the White Sox in the middle of the 1979 season.

His time on the south side lasted two and a half years and Ed made the most of it. He got into 42 games in the second half of the '79 season and he responded with a 2.43 ERA and 14 saves. In 1980, he had a 3.34 ERA and recorded a career-high 30 saves. The 30 saves was third in the league behind Goose Gossage and Dan Quisenberry, who each had 33. Ed made his lone All Star team that season.