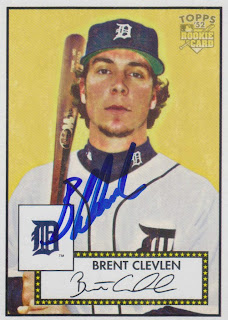 Here is the second card that I was able to get signed by Brent Clevlen during his time with the Wichita Wingnuts. I posted the first one earlier this year and it can be seen here.

Brent spent parts of four seasons in the Major Leagues. The first three were with the Tigers and the final one was with the Braves. He got most of his big league time in during his initial call-up in 2006. He had a good season that year as he hit .282 with a double, 2 triples, and 3 home runs. He would not get another extra base hit at that level until 2010 while with the Braves. So far, for his career, Brent is a .234 hitter over 77 at-bats.

Brent played in Wichita last year and had a smoking season. He hit an astounding .372 and hit 20 home runs and had 80 RBI. He was obviously a key component to the Wingnuts winning it all last year. He is currently playing in Mexico and hitting .307 for Puebla. Other notable names on Puebla's roster include Luke Scott, Willy Taveras, Armando Galarraga, and Miguel Tejada.

I really like rookie sets. Topps put this set out in 2006 and 2007 and, for many of the players, this was the only card ever made of them from their time in the Major Leagues (basically only non-Bowman card). But, I think Topps missed the boat on this one in two ways. First is the '52 Topps design. It is an iconic design, but it was used for the initial Topps Heritage set. Second, they put the same design out for the rookie set TWO YEARS IN A ROW. Why would they do that? Plus, to make matters worse, you practically need a magnifying glass to read the fine print on the back to see what year the card was made so you can sort them accordingly.

I just got a card signed from this set a few days ago.