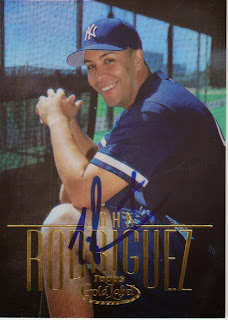 Here is a card brand that I have never seen before- Topps Gold Label. It almost sounds like a fine American whiskey. Nevertheless, it is one of the many cards that were available in the early 2000's. The only reason why I have this card is because John Rodriguez played for the Wichita Wingnuts in 2012. You are probably seeing a pattern right now as most of the recent signatures I am showing off are from Am-Ass players. That is because I was not collecting at the time and have bought cards from that period to get cards signed at Nuts games.

I posted my first John Rodriguez card just over two years ago. That card was posted way back when I was posting 2006 cards. It was made after John made his Major League debut with the Cardinals. This card, however, came out a few years before that one. This one was made when John was still a prospect in the Yankees organization.

John must have been playing in a warm-weather league since he is wearing shorts in this picture.

Today, the Royals Caravan hits the area. I am looking forward to getting some cards signed in-person!
at 12:50 AM