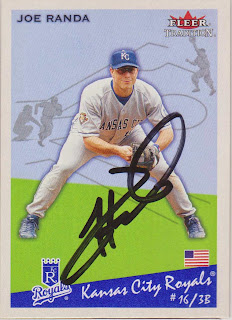 Speaking of Fanfest, this year's edition is next weekend. Surprisingly, Joe Randa is not going to be there this year. And as far as Royals alumni goes, the only new name I see is Al Fitzmorris. All the rest are retreads that are there just about every year. There are a couple though that I have missed out on that I hope to get this year. Those two would be Shawn Sedlacek and Jerry Terrell. It would be nice if the Royals could bring in some new names once in a while.

Fanfest time means that the Royals Caravan is also hitting the road. While the Caravan is actually hitting up my hometown this year, the participants are less than spectacular. My leg of the trip includes Brandon Finnegan, Lane Adams, and Jeff Montgomery. While Finnegan is a top prospect for the Royals, and made history last year as the first player to play in the World Series and College World Series in the same season, there are no cards of him. Topps didn't put him in their Update set or Bowman Draft Pick and Prospects set. Lane Adams only played in parts of five games last season, mostly as a pinch runner, and only has one Bowman card out. And I have plenty of Jeff Montgomery autographs (see here).

While I would like to think that I got bad luck on the draw of participants, the other two legs do not fair any better. One leg gets back-up infielder Christian Colon and relief pitcher Louis Coleman and the other gets back-up catcher Eric Kratz and pinch runner Terrance Gore (each also has a Royals Hall of Famer). In the past, the bigger names on the team have always participated. This is the worst line up I have seen since the early '90s when Steve Shifflett, Kevin Koslofski, and Keith Miller came to town.

Hopefully Fanfest will suck less than the caravan.

The good news about all of the Royals alumni retreads (and some of the younger players) is that I will be able to get some cards signed for people, if needed. So, if you need an autograph from one of these guys, let me know. Email me at zman40 at hotmail dot com. I will pay for return shipping, but it is going to cost you one autograph. I don't care who the autograph is of or if it is certified, in-person, or TTM. Just send me one autograph and the cards you want signed. Because of the randomness of Royals Fanfest, there is no guarantee that your items will get signed. In the event that your cards do not get signed, the autograph sent to me will not be returned. Your cards, however, will be. If you have any questions, email me or ask in the comments.

Probably my favorite set of all-time.