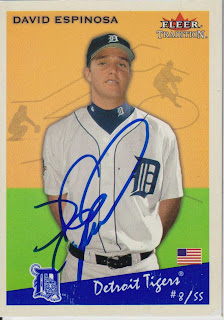 Here is the third and final card from the 2002 Fleer Tradition set that I have to post. Like the previous post of Angel Berroa, this card is from an American Association game on a card from the Fleer Tradition Update set. But this card is not like the Berroa card. This card is numbered 63/200. What makes this card so different that it needs to be numbered? This card is glossy! Why Fleer thought it needed to take this fine looking set and add gloss to it is beyond my comprehension. Plus, to make matters worse, it appears that the card stock is no different from regular Fleer Tradition. In order to get the gloss feel to the card, it appears that a clear layer was added on top of the card. I noticed that because some of that layer is bubbling up around some edges making it very obvious. It looks like in fifty years, I may have an unsigned, yet numbered, Fleer Tradition card that is not glossy. Who came up with these ideas? That must be one of the reasons why Fleer is no longer around.

Since I was not collecting in 2002, I am very curious how glossy cards of the Update set were even obtained. Did the Update cards come in packs? If so, were the numbered cards inserts?

I believe that this is the fourth card of David Espinosa that I have posted on this blog. The other three were obtained at the 2010 American Association All Star Game in Wichita. All three cards were posted shortly after that game.

This autograph was obtained towards the end of this past season in Wichita. David was playing for the Wingnuts at the time. He was picked up for their stretch run and was a key member to their championship squad.