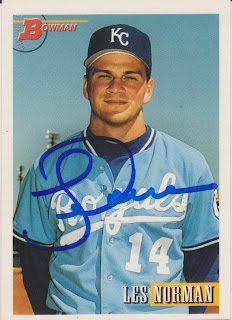 Here is a card that I got signed at Royals Fanfest this past winter. Les played for the Royals for parts of just two seasons, so it is kind of neat that he attends even though he spent just a little bit of time with the team. A little variety at Fanfest is always good and it is always nice to add a new autograph to the collection.

I thought that I didn't have any cards of Les, so I picked up a couple from COMC. Then, of course, a couple of months later, I was thumbing through some minor league cards and I came across a card of Les. Oh well. At least I have one for the nest time he is there.

Les was drafted by the Royals out of St. Francis (Illinois) in the twenty-fifth round of the 1991 draft. He signed that year and played in 30 low-A games, hitting .245. He was moved up to high-A the following season and did good enough to get a mid-season promotion to AA in Memphis. He then played in Memphis for another two seasons before getting bumped up to AAA at the end of the 1994 season.

In 1995, Les made his Major League debut. But, I still have one more card of him to post, so I had better save something for that card.
at 8:50 PM