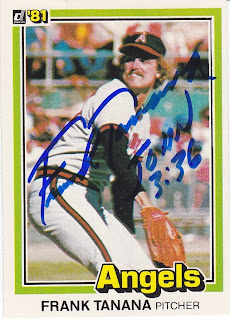 At the rate I am going right now, I should still be posting '81 Donruss cards well into next week. They keep coming in and I am out of stamps, so there are none going out right now. But that will change shortley.

Here is one of the three cards that Frank Tanana signed for me earlier in the week. This card is from his glory days with the Angels. Apparently, Frank used to throw some gas in the '70s. From 1976 to 1977, Frank struck out at least 200 batters a season including his career high of 269 in '75. Add Nolan Ryan to that rotation and you have got a ton of Ks coming from the first and second starters.

Frank was a three-time All Star in the late '70s with the Angles and he won a career high 19 games for them in 1976. The All Star game that summer was the only one that he actually played in and he had a rough outing. He pitched two innings, allowing three runs on three hits, while walking one and striking out none. That's not the way you want your lone appearance to go.

After the 1981 season, Frank and two other players where shipped to Boston for Fred Lynn and Steve Renko. Frank pitched in Beantown for one year before moving on as a free agent.