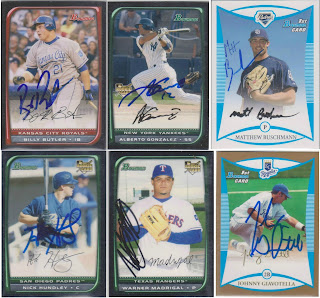 I have been posting 2008 Bowman cards for about two months, but that is over now. Here are the cards I skipped over. I originally planned on skipping over cards when it was of a player that I have posted on here before. But, I decided to switch it up when I got to Alberto Gonzalez. I have not posted a card of him yet, but I have a 2008 Upper Deck Artifacts card of him where that is the only card of the set that I have signed. So, I have to post that card. So, rather than doing two posts about him, I will be lumping him into the "Rest of" category twice before he gets his first post.

Billy Butler- He signed this card for me from the Royals parking lot after a game in 2008. Those were the good ol' days.

Alberto Gonzalez- He signed for me in 2015 while he was playing for the Wichita Wingnuts.

Matt Buschmann- A Padrograph. I don't think I mentioned it in his original post, but Matt is the bullpen coach for the Blue Jays now. I also have one more of these if anyone needs one.

Warner Madrigal- He signed this for me at a Northwest Arkansas Naturals game in 2010 when he was on a rehab assignment with the Frisco Rough Riders.

Johnny Giavotella- This one is like Alberto Gonzalez in that I haven't given Johnny his own post. But, that is coming shortly. This one was signed in 2009 at the Wilmington Blue Rocks game I attended. If I had to guess, I would say that this photo was taken at Wichita State's Eck Stadium in 2008. WSU hosted a regional that year and Johnny's New Orleans Privateers were one of the four teams there. Back then, Eck featured a turf infield and grass outfield just like the photo on this card. I went to two games in that regional, but I did not see New Orleans play.