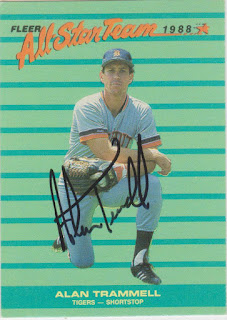 Here is the card of Alan Trammell that I got signed at Spring Training in 2014. Alan was the bench coach for the Diamondbacks at the time and he signed for fans by the Major League practice field. Alan would only sign one card per person and this is the card that he signed for me. But, he signed for quite a few people, and I was able to send my son up there to get another card signed. I posted that card three years ago and it can be seen here.

This is the third card of Alan that I have posted on here. While I only got two cards signed by him at Spring Training that year, I did get him through the mail in 2009. He was working for the Cubs then and I sent him his '81 Donruss to sign for me. That card can be seen here.

This is a fun card of Alan. These All Star cards were randomly inserted into Fleer packs back when insert wasn't even a term in the hobby. I am surprised that I even have this card because I have virtually no cards from the '88 Fleer set. Looking at what I have, I could not have bought more than four packs of Fleer that year. Why that is the case, I have no idea. I loved Fleer in '87 and I do not hate the '88 design. I just barely bought any that year.

This insert set was limited to twelve cards and it is a random assortment of "All Stars". Eight of the cards are American League players and only four are from the National League. Only four of the cards feature players that started in the '87 All Star Game and there are three cards of players that weren't even on the All Star team. I guess these are just guys that would have been on Fleer's All Star team. Still, it is a fun card to have signed.
at 12:11 PM

Very cool. I love how Trammell's signature pops off of the card. Getting the other eleven guys to sign their cards in black Sharpie would be a pretty cool project.

That's the same card that I've been carrying around with me hoping to get signed. I still haven't run into Alan, but my brother always questions my choice on why I want that card signed. I think it looks great, and now seeing it signed only enhances my decision. Hopefully, I'll catch him soon.

Fuji- I do not see that project happening as most of the guys do not sign through the mail or coach. The only good signers in the set all charge between $5-$35. It would be cool, though.

Dan- The only regret I have is that I got it signed in black instead of blue. Back then, I used to roll with a black sharpie in one pocket and a blue one in the other. I mainly carried the black one around for getting Royals cards signed with a lot of blue on them. Since I rarely get Royals autographs anymore, pretty much everything I get now is signed in blue.

Kudos for wanting that great looking card signed! Glad I am not the only one.

Two years later and I finally got it signed. It looks identical to yours, though, I went with blue. My brother was with me and had a change of heart, he thought it came out looking great.